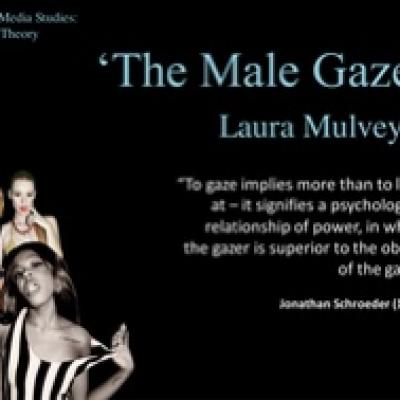 Since the term was first coined by Laura Mulvey the male gaze still dominates film, media and TV.
by Madison Fairchild & Ryan Barr

In 1975, Laura Mulvey published her book, “Visual Pleasure in Narrative Cinema”, while the book mainly focused on the portrayal of women, it was the first time anyone had questioned the effects of stereotyping in the media. She brought attention to the over sexualisation of women at the time, and how female characters are often given less development than their male counterparts, often used as little more than a macguffin for the male protagonist to get the plot in motion. It has been over 40 years since Mulvey brought this to attention, and while the portrayal of women has become more realistic over time, a lot of Mulvey’s point’s are still very prevalent in modern cinema.

Mulvey coined the theory of ‘The male gaze’, saying that  “the gender power asymmetry is a controlling force in cinema and constructed for the pleasure of the male viewer, which is deeply rooted in patriarchal ideologies and discourses.”This essentially means that the typical narratives in film are aimed towards the male viewer. This manifests itself in many sectors of a film, you probably realise that the majority of protagonists are male, but it can also be demonstrated in something as simple as framing.  Women are often framed as though a man is looking at them in a sexually objectifying manner, with the focal point being on the body rather than the face, framing like this would be considered an odd choice if it were on a man, bad practice even,  but with a woman it’s commonplace. This is often attributed to hollywood being historically male dominated,  men in the industry, especially those in the very misogynist 60’s and 70’s would frame and write women in this materialistic manner, and over time these conventions have woven themselves in to the foundations of film language, and in turn inspired future filmmakers, who will, consciously or subconsciously follow these codes. While compared to the earlier films of the so called golden age, modern cinema is much less on the nose with it’s sexism, and well written female characters like Fleabag and Juno are becoming all the more common, notice how I didn’t say ‘strong, independent female characters’ there, because having those traits without a well written character can be just as harmful, but we’ll talk about that later.

So first of all, let’s talk about the likely root of the problem, male domination in the industry  a problem that plagues both cast and crew. According to a study by producer Stephen Follows that surveyed over 2,000 of the highest grossing films from the past 20 years, only 22% of people working in all sectors were women, the majority of those being in costume and make-up, and only 5% of those 2,000 films were directed by women. This means that men are still running the set, and that seems pretty evident when you look at how women are portrayed.Now it could be argued that this is because less women have an interest in film, as there seems to be less incentive given that there are barely any female role models in the industry, but 50% of film school graduates are still female, meaning studios are disproportionately hiring men over women despite them having the same qualifications. And because of this, the male writers in the industry are largely writing male protagonists because they’ll relate more to them, however this causes a lot of problems when it comes to the representation of women on screen. As women make up just 30.8% of all speaking roles and 18%  of the leads.  The reason for this is hard to define outside of straightforward misogyny, because female led films can be just as successful, for instance 2017’s Wonder Woman happened to be the only good film in the DCEU and made over 800 million at the box office, not to mention it was also directed by Patty Jenkins who had been trying to get permission for the film to be made for over 10 years, but was turned down by the warner’s again and again, likely because they didn’t expect a female led film to be successful .Out of 7721 films surveyed, only 57% pass the bechdel test. A test created by Alison Bechdel to evaluate the portrayal of women in fiction that has three requirements that a piece needs to meet in order to pass, those being.

That is a very low bar. And yet 10.3% of the films surveyed fail to meet even one of those requirements. To try and level the playing field, rather than make original films with female leads,as originality isn’t really hollywood’s thing right now, studios are making all-female remakes, which aren’t good for anyone involved, especially the women. From the very moment the films are announced, people take to youtube to yell ‘Feminists are taking over!’ from the rooftops. For instance leading up to the release of ghostbusters 2016, people called for a boycott of the film,and then it lost over $70 million dollars , despite having a fairly positive response from critic with 74% on rotten tomatoes. But of course the executives will look at that financial loss and go ‘Oh well, guess female led films don’t work after all’, they can blame it’s female stars and use it as a scapegoat for continuing to make male dominated pictures, but that’s just not the reason for the films failure, it failed because it was a reboot of a beloved work, there really was no hope for the film to succeed, especially given that armies of sexist fans came out of their basements to rant about how women shouldn’t be ghostbusters, drowning out any positive criticism it got, and aside from the high expectations set by the original ghostbusters, it was a fairly well written film and if it had been a standalone film about a group of women and the supernatural, it would have been accepted, sure it’s not great, but then neither are any of the transformers films and they made a combined 4.3 billion worldwide.

The issue was also very clear in Captain Marvel, after Brie Larson received online harassment for “not looking strong enough” and the characters perceived lack of friendliness. The issue became more prominent when Larson commented on lack of gender and race diversity in critic screenings. However, the film succeeded due to Larson’s handling of the situation presented an unapologetically femenist demeanor while focusing on the important message attached to the hero.

But what happens when you go to the opposite side of the spectrum, where women are without flaws and are skilled in all areas. Now a strong female character should mean that they are strongly written, they have problems, emotions, moments of weakness, moments of strength, and memorable, definitive traits. In other words, she should be like a human being. But many writers take Strong female character to mean a female character that has one defining feature, strength, which is driven to such an extreme that nothing else about her character has room to grow. Characters like Black Widow, Princess Leia in ANH and Gazelle from Kingsman. Gazelle, a character who’s name is uttered just once in the film, is an assassin, and that’s essentially it,  which is a shame given that she has some interesting potential as she’s a double amputee, something that certainly doesn’t get that much representation in the media as anything more than a liability, there could have been an interesting arc where she overcomes her disability, or realises she’s more than the blades on her feet, but no, her character remains completely stagnant in both Eggsy’s and the audience’s eyes. In fact her character in the comics was originally a man, and her involvement is portrayed as a positive, feminist move in the films marketing, despite how director Matthew Vaughn said he only changed her gender because it would be sexy, not because it would be an interesting spin on the character, or because he believed female representation was important. That sums up a lot of problems within the industry. Princess Leia in A New Hope is not given a second to mourn for the loss of her entire planet for the writer’s fear of her being seen as ‘weak’ for mourning the loss of literally everything she holds dear, because she needs to remain strong or the audience will see her as another fragile damsel.Then of course black widow has an amazing backstory about her training and childhood of abuse, but aside from a short scene in age of ultron,it’s never really tapped into by the writer’s and she doesn’t have many signifiers of an abusive childhood, which could potentially be harmful for people’s perception of abused children, because the media can have a huge effect on people’s outlook on life, so by portraying women in unrealistic way, in so many films that people watch throughout all their lives, their view of women is being morphed in this manner. Not just men’s perception of women, but a woman’s perception of herself as well, through the messages of these films she could either conclude that she is secondary to men, or that in order to be taken seriously she must become an empty shell devoid of emotion. And that’s not good at all.

But things are looking up, for the fictional women at least, HBO’s flagship shows game of thrones and Westworld are both led by many well written women, Cersei,  is a character who has gone through massives struggles to maintain control and come out not unscathed, like Black Widow would, but instead she has come out of those struggles a changed character who has learnt and been moulded by her experiences, Maeve has become the most powerful host in the park on a desperate search to find her daughter, Dolores Abernathy has broke out of the Damsel in distress narrative she was assigned by the park to become a massively influential character in the hosts escape, which is quite a nice commentary on how women in the both the fictional and real world are breaking out of their expected roles.The new star wars films have had well written female leads, which is something large film franchises don’t often do.The weak love interest’s of 50’s cinema are slowly fading away, and many of the issues are instead stemming from misguided but genuine attempts at writing strong women, it appears the men just need a little help from the women in that department because behind the scenes, things still aren’t improving, crews are still 78% male while many qualified women are left without a job. It’s obvious that studios are turning women down based on what’s between their legs, which is especially odd given that based on recent events, it seems as though the powerful people in hollywood seem quite interested in what’s between a woman’s legs.