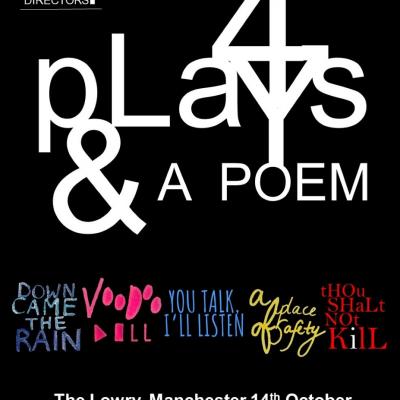 4 Plays and a Poem

Carla Owens reviews Four Plays and a Poem by 4 female writers and directors, all UCLAN graduates, that examine the human condition and morality.

She also wrote and directed Thou Shalt not Kill, one of the more comprehensive plays of the night. Thou Shalt not kill is a shortened adaption of a full length play. Thou Shalt Not Kill watches the daughter of a murdered woman and the mother of her murderer argue for the killers life (as he has been condemed to death penalty). Juxtaposing a daughter who lost her mother and a mother who might lose her son was a very intelligent decision. The two struggle to find common ground despite having empathy for each other. They discuss, religion, justice, love, loss, closure, and whether two wrongs really do make a right? At the end of the performance the question was turned to the audience, as we were asked to vote whether the murderer’s life should be spared.

I was impressed by the quality of the actors, particularly Lucy Eleanor (Daughter), her character was well developed. There was a child like quality to her performance, as if her life had halted the day she witnessed her mothers murder.

Overall the play was successful – tense and interesting throughout.

You’ll Talk, I’ll Listen written by Sue de Gruyther is a play about male suicide. Sue writes  ‘I thought this crucial issue of male suicide needed explortation and attention’. Throughout the whole play the stage is dark, almost no light is cast on the actors allowing the words to truly speak for themselves. While I thought the dialogue was slightly contrived and ineffective, other members of the audience felt the play’s message resonate. Another member of the audience told me they wished their father and brother could see the play.

A Place of Safety written and directed by Carmelina Mazziotta follows the story of two young Syrain refugees who fled their homeland and settle in England to create a new life. While a very important story was being told, I’m unsure whether it’s delivery was successful. I couldn’t quite get over the odd and somewhat jarring decision to cast middle aged white-British women as Syrian schoolboys. While the actors were not untalented, they seemed to treat the boy’s broken English as if it were Shakespearan verse. Which seemed ill fitting for such a contemporary story.

Down Came the Rain was the final play of the night, written by Christine Tuson and directed by Lorna Mccoid. Down Came the Rain was about Manus and Scoop -’ two loveable rogues’ – trying to burgle Manus’ ex-girlfriend’s apartment. The play was well written, funny, very well acted, but slightly confusing at the end. It seemed to be the most well received performance and it was clear that everyone involved had a good understanding of what it takes to make a play engaging.