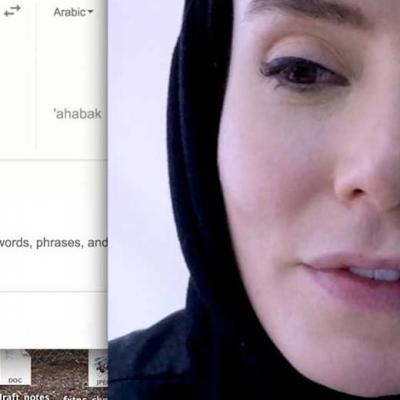 Profile (based on true events) follows the story of a struggling and unhappy journalist who poses as a young Islamic convert to lure an ISIS recruiter in an attempt to get the story that will make her career. The entire film is shot through the computer screen, with characters communicating over Skype and messenger apps. Timur calls this ‘Screenlife’.

His most commercial success was producing Unfriended – a horror film which we may not all have seen, but have most definitely have all seen the trailer for. I was slightly sceptical going into Profile, I was unconvinced by the concept of Screenlife – ‘movies that revolve solely around the screen’. However, I really was impressed by this film.

Throughout the film I was never bored and had a good time. I was impressed with the actors ability to maintain the conflict and tension despite not having as much to work with or bounce off. I was particularly impressed by Shazad Latif (also known for Clem Fandango), who plays Bilel the ISIS recruiter. He manages to play quite a charming and sympathetic Jihad, and for a lot of the film I really quite liked him. By the end of the film, this serves as a reminder just how dangerous and manipulative such people can be.

Another thing I think is useful about Screenlife is how low-budget and accessible it is. I think this would be a really useful tool for young/first time filmmakers to break into the industry. For example, Unfriended was made on a budget of $1 million and grossed $64.1 million worldwide. Screenlife poses new challenges and interesting restrictions, which could produce bland horror films but could also be a serious way to tell contemporary stories.

I don’t think Screenlife is the future of cinema, however, it should not be dismissed as a gimmick.