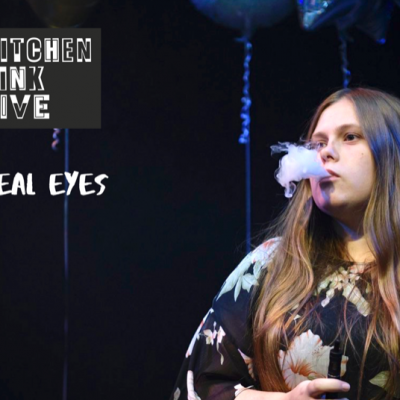 Real Eyes is a new play written and performed by Liverpool based multi-talented Abby Melia, who is also the co-artistic director of Kitchen Sink Live, alongside Bradley Thompson who beautifully executed the musical direction of this piece. This work in progress version was directed by co-artistic director of 20 Stories High Julia Samuels. The play was produced in association with Unity Theatre and 20 Stories High. I went to watch this play on the 13th of November 2019 in the lovely intimate Unity Theatre. This piece has been in development over the past couple of years and performer and writer Abby Melia was inspired to write it based on her own experience of witnessing domestic violence. Abby Melia gives thanks out to the late dramaturg Philip Osment, who was key in developing this piece. Kitchen Sink Live is a youth theatre movement providing open accessible platforms, empowering people to tell real stories to challenge current perceptions. They believe in telling the real stories of young people in order to bring a younger audience into theatre and to give them ownership of their work, whilst empowering participants and audiences and instilling them with hope and a sense of belonging. Abby is leading by example and demonstrated exactly what the company sets out to achieve with their participants, by writing and performing this honest and heart warming one woman show.

We first meet Sophie hoovering her house, music playing, she is in her own zone. Then she notices us, the audience, and starts to tell us her story. An intimate, light hearted, conversational tone is set and the story begins to unfold. Sophie’s mum had called her while she was in school and she got kicked out of class for it, now she’s at home cleaning the house before meeting her mum’s new boyfriend Phil. It feels like you are right there with her, and she is talking to you as a friend. After putting the hoover away and having a little chat with us, telling us about what she’s going through – in Scouse may I add, she refreshingly, actually sounds like the young people in Liverpool today sound like! The soundtrack is also current and it beautifully represents the movement in time, from one space to another. Perfectly reflecting the deeper emotions that Sophie is going through, as we have a moment to reflect on what she has told us so far. This pattern continues throughout the play and it really transported me into Sophie’s world. One day she is opening her birthday presents singing along to the radio, by herself. On another day, we see her cleaning up smashed plates from the floor. We gain insights into these snapshot moments in her life, as she is going through them. She is honest, powerful, funny and heart-warming. We are right there with her, watching her crying her eyes out, fall apart, and put herself back together. Then the ultimate scene transports us a year into the future, where Sophie demonstrates emotional intelligence, forgiveness and strength and we learn that this is not just a story about domestic abuse, but in fact the story of a young woman’s journey to self-empowerment.

Abby’s powerful performance was astounding. She had me on the edge of my seat, moved me to tears and I was laughing out loud. The set and design was simple, yet effective. As this play progresses I would definitely like to see more of a set and design to be incorporated. It was only half an hour long, which left me feeling like I wanted more. It was followed by a Q&A at the end with Abby Melia, Bradley Thompson, which worked really well. Audience members said it made them feel like they were not alone, that it was relatable, delicate and aspirational. A teacher from a school said that it gave her a deeper insight to her students and she said that she would love to see it being performed in schools. A young person said “I have never seen anything like this before, it’s impressive” and everyone wanted to keep the conversation going, as it had inspired them to reflect on their own lives.

If you’re a young person, a theatre practitioner, a student, a parent, a teacher, a social worker or anyone who likes to go to theatre then I would recommend you get yourself a ticket and get involved.